A recent acceleration in ice loss in a previously stable region of Antarctica has been detected by ESA’s ice mission.

We live on the surface of an ever changing planet and it is widely regarded in the global climate science community that our carbon emissions along with other dense gasses are accelerating this change. We have been warned as a community for years that without proper change this change will have dramatic consequences on our way of life. The principal concern of climate change is that as the global temperature increases so sea level will rise and we are now capable of measuring such devastating effects. 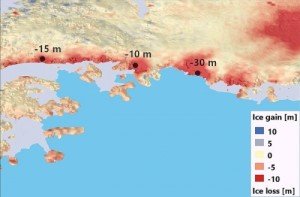 Since 2009 satellites have recorded disturbing news from the Southern Antarctic Peninsula that details dramatic  glacial melting leading to massive ice loss. This was a previously stable ice shelf that has within the last 6 years shed 300 cubic kilometres of water directly into the Antarctic ocean making this shelf one of the largest contributors to rising sea levels in the world.

The important piece of information to gather from this is that this is not an expected event. This ice shelf has remained largely dormant since we began monitoring it and the change has been incredibly rapid. This loss of ice is so huge it has been detected and attributed to a change in the Earth’s gravitational field by NASA’s GRACE mission.

The current explanation for this loss of ice is the warming of the Antarctic oceans caused by increasingly harsh winds driven by higher global temperatures pushing warmer waters further south.